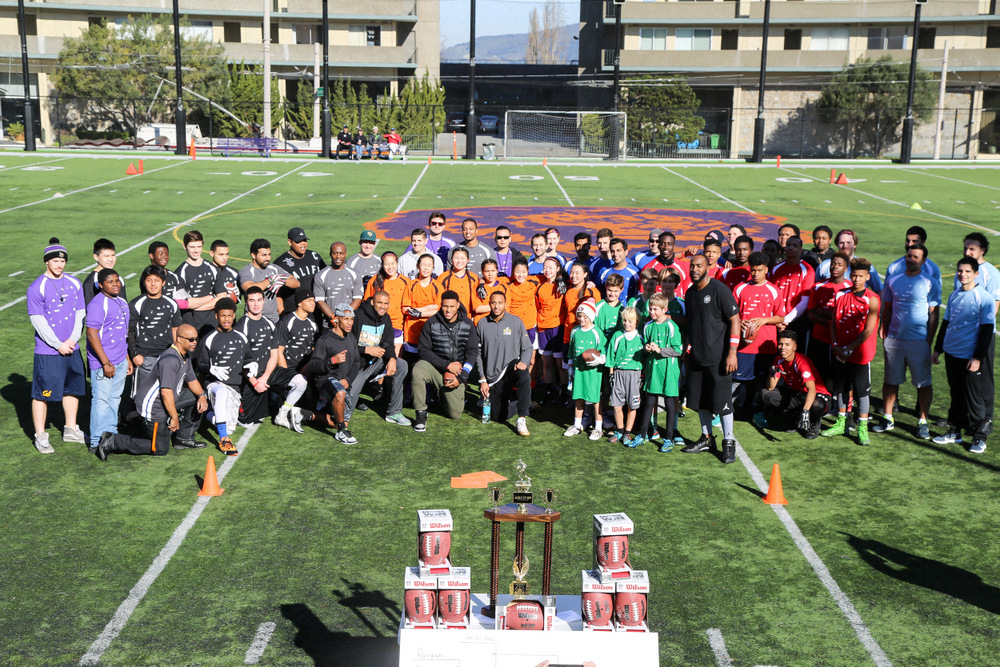 NFL Stars Help Kids Succeed On and Off the Field

When the Seattle Seahawks won Super Bowl XLVIII, Malcolm Smith earned the title of Super Bowl champion and took home the Super Bowl MVP trophy. That win also put him in an even more exclusive category – one that he gets to share with his brother, Steven, former New York Giants wide receiver. Malcolm and Steven Smith are one of only six pairs of brothers in NFL history to become Super Bowl champions.

Malcolm, now an Oakland Raider, and his brother Steven, now retired from the NFL, are working on leaving an even bigger legacy off the field. In 2014, they formed the Smith Bros P.L.A.Y. (Practice. Listen. Apply Yourself.) Foundation with the mission to impact youth through education and athletics, using work-based learning programs and athletic enrichment events.

With Super Bowl 50 on the horizon, Malcolm and Steven are preparing for their P.L.A.Y. Foundation’s upcoming “Air It Up” event at Galileo Academy in San Francisco. This event offers a chance for football enthusiasts of all levels to play a round of touch football not only with the Smith brothers, but also several other current and former professional athletes. All proceeds from the event benefit the P.L.A.Y. Foundation’s mission of supporting youth through sports.

Malcolm and Steven Smith told 24Life why their foundation and mission are important to them.

24Life: What inspired you to start the P.L.A.Y. Foundation with your brother?

Steven Smith (SS): I wanted to make a difference in youth communities and help create opportunities for them to see how far in life they can go.

MS: Just thinking about all the support that I had in my community when I was a youngster inspired us to try and impact other kids like us.

24Life: Your non-profit foundation was created to make a positive impact on youth through education and sports. Why is this particular mission so important to you?

SS: “Practice, listen, and apply yourself” are the key elements that got my brother and I to where we are, and by encouraging children to focus on those key aspects, they too can succeed. The P.L.A.Y Foundation was established so Malcolm and I could give back our mentorship, knowledge and skills to youth ages 8 to 18, through different channels including competitive sports and education.

MS: We feel like this is a great way to be successful in any arena of life. The lessons learned from trial and error never go unmeasured.

24Life: You were both student athletes; how did this impact your commitment to your studies?

SS: Being a student athlete, I wasn't able to focus as much as I would have liked. I worked through this challenge by learning how to balance the things that were important in my life. I hope to impart that knowledge onto children through the P.L.A.Y. Foundation.

24Life: Steven, how did your relationship with fitness, health and life change since retiring from the NFL in 2013 due to a knee injury?

SS: At first, my knee injury affected my motivation and I developed a fear of another injury. With rehab and perseverance over time, I have gotten back to working out. I still enjoy watching football and physically my knee is a lot better, and I am able to do a lot more.

24Life: What important health and fitness tips do you recommend for kids to promote nourished minds and bodies?

24Life: Malcolm, you were named MVP of the XLVIII Super Bowl. What other goals do you hope to achieve in your football career?

24Life: After an impressive first season with the Oakland Raiders, what does your training for the offseason look like? Is there a consistent approach that you take to insure you are regenerating and restoring your health?

MS: I'm constantly in pursuit of a fitter body and a stronger mind. Every day I try to push myself physically and mentally. As far as recovery goes, it’s eat well, sleep well.