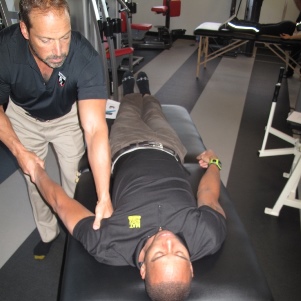 The Denver Broncos had more than a game-day strategy to win Super Bowl 50. In fact, for many years, the team’s long-term strategy behind the scenes has involved Greg Roskopf and his innovative physical approach to injury recovery and prevention. Through his work, he’s helped the Broncos and other star athletes return to the field and perform better.

Roskopf, founder of the innovative Muscle Activation Techniques or “MAT”, is a Denver-based specialist who has been working with the Broncos as a consultant for nearly 20 years. This is the third time the Broncos have won the Super Bowl, with Roskopf involved behind the scenes, performing hands-on work with players whose injuries sometimes cannot be fixed by conventional rehabilitation.

Roskopf visits the Broncos training facility a couple of times a week and sees the majority of the players. He also meets with the players who have special needs on an individual basis at his office.

But what does he do that is so special?

While Roskopf doesn’t provide medical treatment, he does work with athletes after they’ve sustained an injury using methods that are not focused on treating the injured area directly, but rather on improving muscle function throughout the body, to take the stress off the injured area so it can heal.

“We look at recovery differently, because we look at the body as an integrated system and recognize that abnormal motion or function in one area of the body can put increased stress on other joints and tissues,” says Roskopf.

Through his trademarked MAT process, which can be described as “a revolutionary approach to the assessment and correction of muscular imbalances, joint instability and limitations in range of motion within the human body,” Roskopf uses his hands to test the range of motion to find out where tightness in the muscles exists, which allows him to pinpoint areas of weakness that need assistance with activation. And oftentimes, there is not even pain in the area that needs the most help.

This investigative process to identify hidden areas that need support has been instrumental in providing new strength, mobility and relief for countless professional athletes, like the Denver Broncos players, who oftentimes suffer from muscle imbalances due to a lifetime of overuse.

In a recent article in The Washington Post, a couple of Washington Redskins’ players sang the praises of Roskopf’s treatment in getting them strong enough to take on the field, citing their progress as “unbelievable.” And Roskopf has been instrumental in helping star quarterback Peyton Manning extend his career and come back after multiple neck surgeries. In fact, according to an article in Sports Illustrated, back when Manning played in Indiana, he would regularly pay for Roskopf to fly in to see him and work with him, calling him “his guru.”

While Roskopf has had great success rehabilitating professional athletes, he also works with the everyday athlete. He believes his craft, which focuses on looking at the entire body to assess and correct issues, is just in its infancy, and he sees it growing in popularity and as a huge area of opportunity for specialization. “I believe in 10 years this will be commonplace,” he said. “You can always benefit by improving the function of your muscles.”